The below picture for this blog post is a powerful image of how the Atlantic ocean will cover New York City’s Wall Street if we allow the world to rise four degrees Celsius. This article explores one piece of the science behind this prediction.

Sea-level rise is one of the most tangible changes that climate change will bring over the next few decades. Indeed, the word’s coastlines will have to be remapped and some of our most iconic neighborhoods will no longer by inhabitable. Understanding the dynamics of ice sheet loss in places like Greenland and Antarctica is extremely important for predicting exactly how much sea-level rise we are due to experience. Understanding ice sheet dynamics and rates of melting has been difficult partly due to the fact that we have not been intensively monitoring the world’s ice sheets for longer than a few decades. Recently, scientists have been getting more creative about extracting useful information from old aerial photographs to more accurately quantify how much ice we have lost in the past century.

A recent report in Nature used photographs of Greenland taken during reconnaissance missions in WWII and applied modern photogrammetric methods to calculate how much ice there was earlier in the 20th century. Authors, Kjeldson et al., combined the WWII aerial survey data with geomorphic observations such as vegetation trim lines (looking at where the maximum extent of the Greenland Ice Sheet (GIS) sheet inhibited vegetation) to get a clearer picture of how much the GIS has been retreating. This allowed them to fill in crucial gaps in the historical data and calculate melting rates. Overall, their data shows that the GIS has contributed 25 cm, almost a foot, of sea-level rise since 1900. 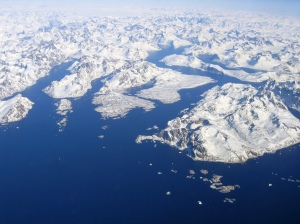 Perhaps most interestingly, the authors were able to compare melting rates in the 20th century to those in the past few decades. In the 20th century Greenland lost 75 gigatonnes per year which equates to 0.21 cm of sea-level rise per year. Alarmingly, rates of ice loss between 2003 to 2010 have double- now at 150 gigatonnes per year. It is clear that melting has sped up dramatically during the time when anthropogenic climate change has become most severe.

Citation of the original scientific article: