The hurdles to carbon farming

Agriculture and land use together are responsible for 25% of all anthropogenic greenhouse gas (GHG) emissions. Land cover change, such as deforestation, adds another 12-17%. Unlike GHG mitigation strategies in many other sectors, the agricultural sector has the technical potential to become a net carbon (C) sink. This has been a hotly discussed topic over the past few months. 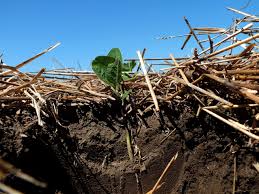 “Carbon farming” is the idea that by instituting agricultural practices such as zero tillage, cover crops, composting, and reducing the use of synthetic fertilizers, we could sequester atmospheric CO2 and store it as long term soil organic carbon (SOC) where it will increase soil fertility year after year. Soils contain the most C of any terrestrial system– 2,400 petagrams (2.4 X 1015 kilograms) –three times the amount in the atmosphere, and 240 times current annual fossil fuel emissions1. Thus, increasing the amount of C stored in the soil by only a few percentage points would be huge.

Why isn’t carbon farming being implemented on a large scale already?

Farming is already a risky undertaking even without making dramatic changes to agronomic protocols. If we expect farmers to make potentially risky changes on behalf of the public good, it follows that the public should help mitigate the financial risks to farmers embarking on what is essentially an R+D project with unknown consequences for their livelihoods. One idea to help compensate farmers is to allow them to sell carbon credits into carbon markets. This strategy necessitates a cheap, accurate way of accounting for the carbon (and other GHGs) that farmers have taken out of the atmosphere and stored in the soil. This is where the ball is back in the court of scientists. Our ability to account for carbon fluxes in varying agronomic conditions is still too limited for all but a few situations.

A recent article in Nature titled “Climate-smart soils” highlights these technical and logistical barriers. Keith Paustian, an esteemed soil ecology professor at Colorado State University, concludes that one of the main hurdles to implementing climate mitigation practices in agriculture is our inability to do fine scale carbon accounting in agricultural systems. In other words, we can’t cheaply and reliably verify that a particular agricultural practice as had a net positive impact with enough confidence to be able to issue financial compensation to the farmer.  The better scientists can get at tracking GHG flux between soil and the atmosphere, the closer we will be to enabling financial mechanisms to compensate farmers for implementing climate friendly practices. In order to understand where the frontier of our understanding is, it is valuable to know a couple basics about how carbon moves between soils and the atmosphere.

Carbon enters soil from plant residues, manure, and other organic waste. Not all of this residue becomes long lived carbon sequestered in the soil– otherwise known as soil organic carbon (SOC). A percentage of the organic matter is lost back to the atmosphere due to the chemical process of decomposition. The exact percentage of organic matter that becomes long lived SOC depends on many factors including the type of material being deposited in the soil, the depth it is deposited, and conditions such as temperature and moisture. Rates of decomposition increase with increasing soil disturbance. Carbon farming techniques implement a wide variety of measures to increase the percentage of organic matter converting to SOC and minimize SOC losses due to decomposition.

Unmanaged systems such as forests and native grasslands have much higher rates of carbon sequestration than traditional farms because they have lower soil disturbance, and decomposition is lower. When you convert unmanaged land, such as virgin forest, to agricultural land, you release 30 to 50 % of the soil carbon stock into the atmosphere. The total amount of carbon released during land conversion has been measured between 0.5 to > 2 Mgs (1 Mg = 1,000 Kgs) / hectare. Therefore, land conversion represents a significant, measurable, and identifiable change in soil carbon stocks. This is partly why incipient financial incentives for carbon smart land management focus on land conversion– we can empirically back up why we are paying someone to not convert the land.

However, analyzing the finer scale movements of carbon and the other two major GHGs (nitrous oxide and methane) in agricultural settings is harder to keep track of. How stable is SOC? How do the dynamics of SOC change deeper down? At what point do soils become saturated and stop sequestering more carbon? What is the source of stabilized SOC? Paustian relays that new evidence suggests that SOC is of microbial origin rather than direct plant origin, so you can see that we are not even sure where it comes from. Without knowledge of these fundamentals, it is easy to see how far we are from being able to extrapolate these concepts across the world’s highly heterogeneous mosaic of agricultural systems… and that’s even without tackling of issue of monitoring GHG sequestration cheaply enough to implement a viable verification system.

Part of the reason why our understanding of these dynamics needs to be so much more sophisticated for carbon farming than for land conversion is because we need to assess the myriad tradeoffs of seemingly simple agricultural management decisions so that we can confidently say that we have arrived at a useful mitigation strategy once all GHG fluxes are properly accounted for. For example, adding synthetic nitrogen fertilizer to soil can lead to the release of nitrous oxide (a bad GHG), however, it simultaneously increases carbon sequestration rates by inducing more growth of biomass. Thus, the “emissions intensity per unit yield” may actually be better with synthetic fertilizer in particular cases. As for the carbon that has been taken out of the atmosphere, how much of it will stay in the soil, and for how long? If the farmer decides to till her field next year, was it the right decision to compensate her for carbon friendly practices this year? What measures need to be put in place to avoid that scenario?

Science and technology, agronomic practices, and mechanisms for implementation are all needed to enable carbon farming on a large scale.

The situation quickly becomes daunting, and requires a step back. What we know for sure is that there are many agricultural practices that do increase SOC over time. Less is known about the dynamics of methane, nitrous oxide, and the stability of SOC under various conditions. In order to enable carbon farming strategies on a large scale we need to line up an acceptable level of uncertainty in GHG accounting and monitoring with the right kind of incentives for farmers. The main weapon in the scientific toolkit for GHG accounting are “process-based models” which “dynamically simulate mechanisms and controls on fluxes as a function of climatic and soil variables and management practices1” In other words, scientists plug GHG factors into equations that simulate how we believe GHGs will behave under varying conditions and management in agricultural settings. The accuracy of these models relies on our basic understanding of the above described processes– as we’ve seen our understanding is limited and the models are not accurate enough for many scenarios. This is an area of active scientific inquiry, and can only hope the models are getting better.

On a more positive note, there are a few specific agricultural and land use scenarios where we have enough understanding of a particular GHG cycle and the corresponding mitigation protocol to enable GHG sequestering practices for farmers. Halting land conversion is one aforementioned scenario, but another more sophisticated scenario is the example of California rice. The carbon and methane cycles of rice cultivation have benefited from extensive research, understanding, and a culture of environmentalism in California. The “Rice Cultivation Projects Compliance Offset Protocol” allows farmers to choose between three methane reducing protocols on their farms which they can implement in exchange for carbon offset credits and sell into California’s cap and trade system. This appears to be a wonderful example of adequate scientific understanding blending with the political will to move the needle on climate change mitigation.

We should put the same amount of rigor and energy into finding new farmer compensation strategies, verification procedures, and amenable policy climates to build upon the California rice example. This will likely involve supporting research to improve our process-based models quickly enough to allow us to track and verify more and more mitigation strategies in more and more agricultural settings. Let’s also accept novel farming strategies for what they are– complicated to implement and fraught with financial risk for the farmer. Given that carbon farming is a process that benefits the public good, it is only fair for all of us to continue to support innovative compensation programs that makes carbon farming less risky for potential adopters. After all, we will all benefit from the upside.